186 Years of Service to the North Philadelphia Community

Mid-Town Parish UMC is located at the corner of 7th and Norris Streets, in the heart of North Philadelphia. For 186 years the church has remained a focal point of local missions in the community.  In the past the Church effectively reached out to the neighborhood providing resources such as daycare, afterschool programs, and youth discipline through sports and spirituality amongst other activities and programs.

Mid-Town Parish UMC, formerly known as Cohocksink and Seventh Street, officially traces its beginning back to 1835 when Sunday school services were continuously conducted on the road after a fire in 1831 and the organization was dissolved. In 1840 the Cohocksink wooden church was built and then replaced in 1853 with a fine, modern, two story stone edifice before moving to new location in 1882, Seventh and Norris Street. Several years later the name of the church was changed to Seventh Street on December 13, 1886. During this year the total membership reached 871, second highest in the Philadelphia Conference under the leadership of Dr. S.M. Vernon. Years had passed and the church was holding its own when in June of 1919, a Monday following a service honoring some of the boys returning from the army, a second fire left the stone shell of the four walls. In October 1920, the new church and parsonage was dedicated and the church continued to be a beacon of hope with its known great leaders, revivals, feeding families, debate club, Sunday School Missionary Society, and Men’s Brotherhood. Ever since the change of the 20th Century the church’s music was well known, especially with C. Austin Miles directing the Seventh Street Choir. Miles was known for his beautiful gospel songs, anthems and for composing “In the Garden”. 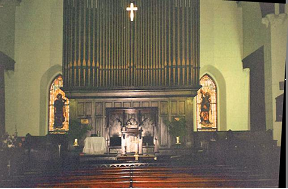 There had been many pastoral changes until the appointment of the late Rev. Frank Kensill in May 1957 accompanied by his wife, the late Winnie Kensill. She was an advocate for social justice and education. The Eastern Pennsylvania Conference had requested him to be the Parish Director of Mid-Town Parish, which consisted of Seventh Street, St. John’s, Memorial Temple and Cookman. Many children and adults benefited from the leadership of the late Rev. Frank and Winnie Kensill because of year-round Sunday school training, mini-school (afterschool program), Sunday youth fellowships and summer camping. They influenced the exchange visits with suburban churches whose members acted as host families to the Mid-Town children during Vacation Bible School week. The experiences also included yearly Advent Services with St. Matthews and Cookman. Rev. Kensill also connected with the community by starting a non-profit energy conservation organization to assist low income families and provide job training. In 1996, the late Rev. Kensill became ill and Rev. George Clark Jr was appointed followed by Rev. Gilbert Hatcher and Rev. Dwayne Royster. In 2005, the church was demolished due to structural damage. Under the leadership of Rev. Reginald A. Monte Jr., from 2004-2014, the congregation continued in mission and continued fundraising to rebuild a new edifice. The Rev William Jolly arrived at Mid-Town in 2014 and actively led the installation of the modular building in 2016. In January 2017, Rev Eric W. Carr, Jr came to Mid-Town Parish to pastor followed by Rev. William Brawner in July 2019 when we began services in the new sanctuary with the continued support of Bishop Peggy Johnson and the District Superintendent.

In August of 2020 a new phase of revitalization under the leadership of Pastor Terry Bridges begun. God has placed on the hearts of the members of Mid-Town to do even more in the coming years! We are always looking for new ways to serve and show our love for our community…and share the soul-saving gospel of Jesus Christ!